What’s a Tower Garden Worth? [Study]

Many growers say a Tower Garden pays for itself in less than two years by reducing grocery store costs. Perhaps you’ve heard that before. But a 2014 study suggests that under the right conditions, Tower Garden can pay for itself much more quickly—in as little as six months. 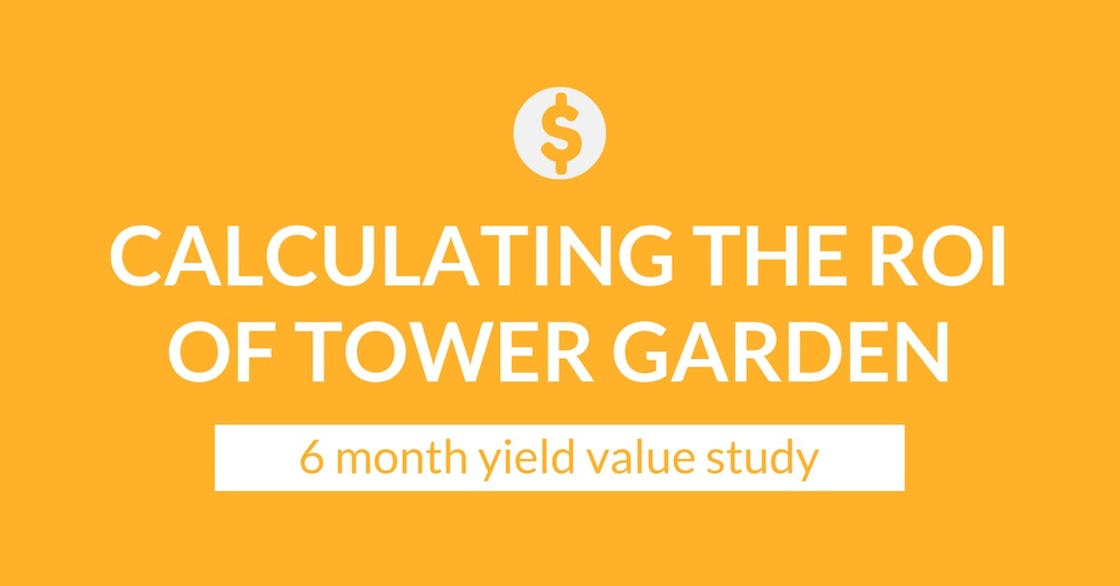 Got your attention? Keep reading to learn the details (and exciting results) of the independent analysis conducted by ATL Urban Farms, a commercial Tower Garden farm and seedling provider.

Bret Bowlin, owner of ATL Urban Farms, was kind enough to share a little background on the project. Here are his comments:

What was the objective of this study?
The objective was to answer a simple question that we were hearing repeatedly: how much does Tower Garden cost? Obviously, $525 plus freight and tax. But Tower Garden is so unique—with a long life cycle and such low operating costs—that we needed to quantify not how much it costs, but how quickly it starts saving money.

Did anything about the findings surprise you?
The real surprise is the savings in the second and subsequent years, after Tower Garden is paid for. Annual operating costs are so low (approximately $170–200), that you can literally save $1,000–2,000! So in virtually any scenario—as long as someone sticks with it—there is a positive ROI.

Is there anything else you’d like to add?
Our findings reflect our personal experience with Tower Garden, and we approached it conservatively. In short, Tower Garden starts saving you money in 6–12 months, depending on what you grow and how successfully.

Note: I sourced the following information from ATL Urban Farms’ warm season vegetable cost analysis. But ATL Urban Farms conducted a cool season analysis, too. If you’d like to see the original results of both studies, or if you have questions about the analysis, contact ATL Urban Farms.

To determine the return on investment, ATL Urban Farms set the cost of buying and growing a Tower Garden for six months at $692. Here’s the rationale for that figure:

In case you want to replicate the conditions of this study, ATL Urban Farms grew the following crops during the warm-weather growing season (i.e., when nighttime temperatures were consistently above 55˚F):

Tower Tip: Need pointers on how to arrange plants like these in your Tower Garden? Check out this planning guide.

ATL Urban Farms found that the total value of Tower Garden yields over six months is $796, exceeding the cost of the initial investment ($692).

Here’s the breakdown of produce cost and yield (click the graphic to enlarge and/or print): 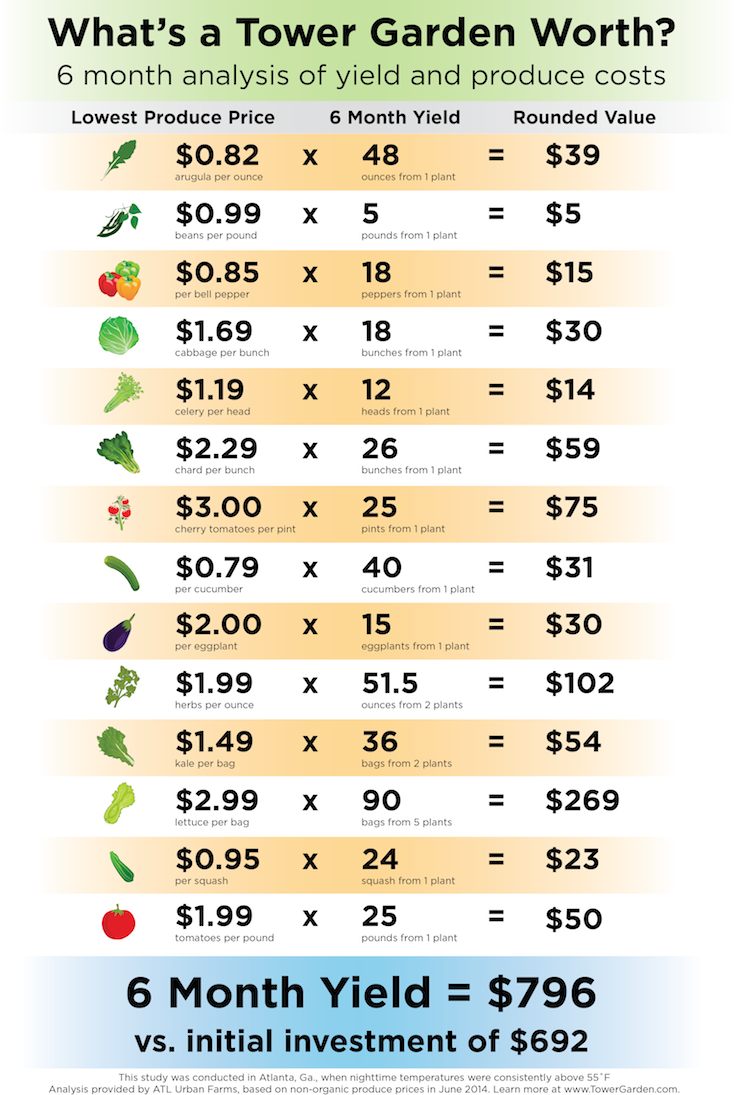 To embed this graphic, copy and paste the following:

These results are based on prices for non-organic produce. But when considering organic produce prices, six months of Tower Garden yields could actually be worth closer to $1,435!

That means if you normally buy organic produce, your Tower Garden could pay for itself in just over three months.

Note: Your results may vary since yield depends on many factors, including location and growing conditions. This study was conducted in Atlanta, Ga., when nighttime temperatures were consistently above 55˚F.

This study takes into account the initial investment of purchasing a Tower Garden. But as Bret mentioned, since you won’t be buying a new Tower Garden every six months, your total costs per yield will decrease with time—as your savings simultaneously increase. ATL Urban Farms estimates annual operation costs (for things like seedling purchases, Tower Tonic refills and electricity usage) at $162.

Not factored into this study—but still valid—are indirect savings on things like trips to the grocery store and wasted store-bought produce. And then there’s the “savings” for the earth, too!

Want even more bang for your buck? Consider:

Saving money is great. And this example of how a Tower Garden can pay for itself within six months is encouraging, no doubt. But let’s not forget the best part: when you grow your own food, you know its source and what goes into it (as well as, perhaps more importantly, what doesn’t).

And can you really put a price on that?

Have you done your own value analysis of Tower Garden? I’d love to hear about it. Share your results in the comments! 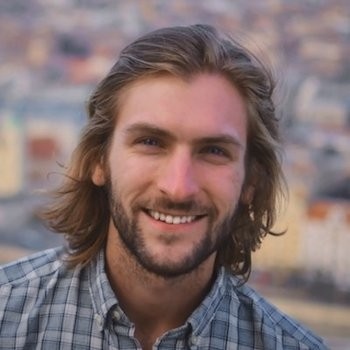 All Articles of this Author


Previous Post
How to Grow Tower Garden Tomatoes
Back to top

Want to leave a comment? We'd love to hear it. Please note that all comments are moderated. Anything resembling spam will be deleted. Try to make this a meaningful conversation for all involved.